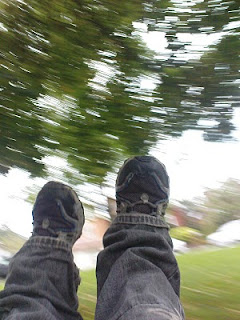 Ben (12 years) took this photo of his feet as he spun around on a rope swing which the local council has twice taken off the big tree in the park at the end of his street in the UK. Thanks to whoever ignored the council and re-hung the swing, the only child centred focus in an otherwise bleak patch of grass on a small roundabout.

And thanks too to Ben’s geography teacher who set a broad project: 'go find your favourite tree near where you live and write about it, or do bark rubbings or photos or press leaves or anything –just tell us about its history and why you like it...'

For many children in the UK opportunity for informal outdoor play has all but vanished. Between 1973 and 2005 the percentage of children playing regularly in the street has dropped from an estimated 75% to 15% (Play England 2009). Play England estimates there are 2.3 square meters of public play space available for every child in the UK under the age of 12 years, that's ‘about the size of a kitchen table’(Play England 2009).
Posted by Assc Prof Bronwyn Hayward at 13:29 1 comment:

Tēnā koutou, welcome- Well the SEEDs are planted -and the journey towards understanding of the economic, social, political and environmental issues facing young ecological citizens begins -join us as we explore how children come to understand their community and their environment, the problems the face and ways to nurture young citizens' democratic imagination.