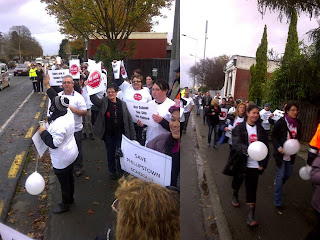 There are many things to say about the New Zealand National Coalition Government’s unfortunate rushed plans to merge and close schools, and also introduce new, potentially forprofit charter schools after the earthquakes in my home town of Christchurch New Zealand.


However here I am just focusing on one school, Phillipstown and why I am joining an Adults-walk- to-school day on 23 May at 8am from Phillipstown school.
A magnitude 7.1 earthquake in September 2010 was followed by 56 earthquakes at magnitude 5 or more in 2 years , including the shallow devastating 6.3 earthquake 22 Feb, 2011 . These events have devastated my community and strained its social fabric .


I don’t doubt, and indeed share many of the aspirations of those who want to think about ways to ensure great education is available for all children (see for example Hana O'Regan on changing the lens). But immediately after earthquakes was never going to be the humane or sensible time to rush reform of  local schools, let alone such sweeping change- because for children and families, a stable school is vital to recovery. The situation was made even worse by suggestions that new, controversial models of forprofit charter schools might be introduced, (a radically new departure of deregulated education with minimal planning which could see tax funds used potentially by forproft companies without Offical Information scrutiny-and see the previous post, my submission on the issue).


But we can make a difference to a decision process that has been dreadful- making things better, one school community at a time. The Minister of Education has listened, albeit belatedly before, and could listen again.


That is why I will be joining colleagues from all over the city to speak out this week for Phillipstown children , a decile one school, a school in a proud but low income community which has been told it is to merge with another school, Woolston, for reasons which are not clear to the community.


In the haste to find a convenient solution to the political storm over the future of all schools in Christchurch, (also a key urban area for the 2014 national election), its not clear if the Minister was advised of the physical risks of this particular merger proposal (a proposal that had not even been the first option of the Ministry).

The merger will require children from Phillipstown to walk or travel to a new school site in Woolston.

Walking to school is great, it get's kids out doors, its low carbon, it has health benefits like reducing type two diabetes and it encourages a sense of community.

But in one of the lowest car-owning communities in the city, walking to school is not a better, greener 'lifestyle option' for many Phillipstown children, its a necessity.
If the proposed school merger were to go ahead, it  will require children as young as 5 years from one of the the proudest but poorest communities of our city to walk to school along  a stretch of industrial (Ferry) road each day –a site that is one of the top 10 sites for crashes involving pedestrians in the region (see page 17). Moreover children would be required to cross this road at its widest point of multiple lanes at the peak danger period, as well as several other intersections.
I’ve walked the route already - it took me 20 minutes in the rain, without a pram and as a fit adult  from school gate to school gate. Even on the Sunday afternoon  I took the route, the traffic was very heavy and the road crossings hair-raising.

This experience of being required to walk along one of the busiest and most dangerous pedestrian  routes in the city was not the vision that Minister Hekia Parata aspired to, when she called for all children to have safe routes to great schools (see image below) .

We know that undistrupted schooling is one of the most helpful things that a government can do for children after a disaster-so where buildings are not dangerous, it is not clear why this school was required to be merged now. The failure of Ministry officials to appreciate the severity of the situation facing Christchurch children and their families post disaster in their rush to reform schools still shocks me. It seems frankly inhumane to rush these mergers rather than support communities over the next 3-5 years to consider their future when they have time and energy. 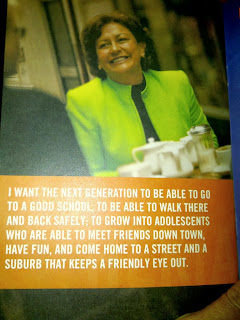 Election advertising material, its a vision I share with the Minister, but is this a vision available for Philipstown too?


There are many other concerns about this particular merger- this is a community that needs its local school as a strong and secure social support and the current merger is effectively closing the school and building new classrooms on another site, when it is also not clear why new classrooms could not be built on the established site and the boards merge as administrative units.
The problem can not simply be dismissed as a case of a small school not ready to move on- this is a community which has existed for over 100 years. A number of police and community workers have privately remarked to me that this school and its Principal have provided stability and aspiration during pretty difficult periods. The problems faced by this school, reflect some of the issues facing New Zealand politics in microcosm.

The Minister of Education is right to propose new innovative ideas for supporting children who need help,  education has to keep evolving. But it also takes a village to raise and educate a child, and the small village community atmosphere of Phillipstown is a reminder of what is can be wonderful about childhood in New Zealand.  The buildings might be pretty humble,  but its Principal is heroic. And it matters that we create and retain all kinds of spaces and places that put children and their needs first

It is for these reasons I will be joining the peaceful Adults-walk –to- school event on Thursday 23 May at 8am to ask that central government slow down and really listen to the community and keep the children of Phillipstown at the school they love. I hope you can walk to school too. 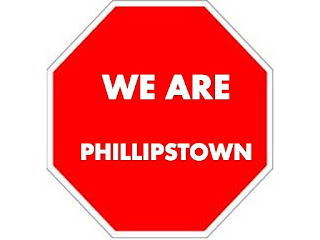 Labels: We are Phillipstown- Why I am walking to school on 23 May
Newer Posts Older Posts Home
Subscribe to: Posts (Atom)