Where have all the adults gone? Europe’s winter of youth discontent begins 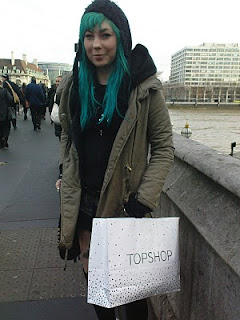 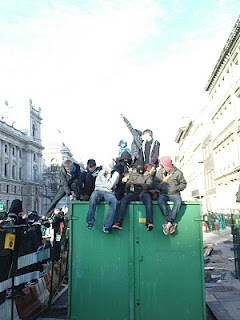 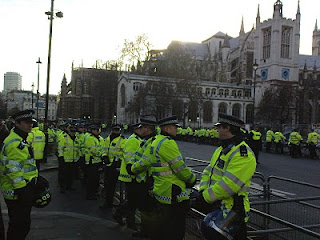 A political sea-change is occurring in UK and Europe, affecting ideas about sustainability and youth politics.

Standing outside the gates of parliament in London today at lunchtime, wearing a work suit and holding a briefcase, I was struck by my age. I was one of a few citizens over 30, let alone over 40 waiting for the arrival of the students marching to protest a rise of university fees in England and Scotland (from 3000 pounds to an upper limit of 9000 pounds per year). I was grateful to the colleague who had texted, reminding me to come.

Clusters of tourists were taking photos of Big Ben, strangely oblivious to the yellow lines of police who surrounded parliament, lines that seemed to stretch as far as the eye could see.

Even this early in the day, the tension was striking. The empty barricaded streets were filled with an uneasy silience broken only by the noise of helicopters and police sirens.

I could not visualise teenagers marching into this atmosphere, to me it was terrifying.

The advocates of the university fee increases argue that the rise is accompanied by a progressive tax rate which is fairer than requiring a flat upfront payment. Opponents argue the introduction of loans is not only unfair but will be as daunting for many students as the eerie quiet canyon of empty streets and waiting police.

Parliament square where the march was to pass is a grassed area reserved for free speech and peaceful protest. Even at the best of times its physically difficult to reach. There is no pedestrian crossing. A small island of democracy in a sea of traffic. Today it was surrounded by high barricades of wire fence. Later watching the evening news I wondered, surely the fences were not a holding pen for kettling young protestors?

Knots of media began rehearsing their scripts, all black puffer jackets and enormous camera lenses. A news reporter stepped into the empty steet, and took five takes to say ‘And so the stage is set for a political battle inside the house and outside the house’ accompanied by sweeping arm gestures, to the amusement of watching tourists.

A mother on a mobile rushed passed me- ‘Darling whatever you do don’t get hurt Ok’ , she shouted frantically into the mobile phone, her own placard firmly under her arm. As she bustled past some of the police behind me laughed, but not unkindly.

Then suddenly from out of nowhere, a roar. The protesters had arrived.

A surge of collective adrenaline. Then, just as suddenly as all that sound and fury had erupted, nothing...just a milling group of teens pouring into the square, with nowhere to go. Some groups were chanting but the mood was unsettled. A large gathering not sure what to do next.

What struck me the most about this crowd as I joined it –(still clutching my briefcase) was its youth, diversity and unpredictability- leaderless, but learning fast. There were no megaphones. Noone seemed quite sure what to expect- some older students dressed in medical scrubs peeled off back to class. They seemed far removed from the clusters of very young boys and teenage girls they had been standing next to.

A police loud speaker repeated a few times- ‘Ladies and gentlemen please move to Victoria Embankment, keep moving please'. The term 'ladies and gentlemen' seemed stilted. Some of those around me looked as young as 12, but the average age was probably about 16 or 18. Why would people protesting a historic vote going on in parliament move on once they’d got to parliament? No one knew quite what to do, but the mood was expectant.

A few people headed to the nearest café to queue for a coffee. Someone threw a plastic bottle and a pink smoke bomb, the effect was startling, like a daring prank.

The first of the fires began next to me- a group of boys, about 14 year olds wearing balaclavas and scarves scrambled onto a green metal storage case and after some fooling around and shouting, set fire to a placard. Young boys, pumped up but not part of the main group. Slightly older students around me, mostly girls worried, ‘Oh I wish they wouldn’t do this, it will look bad and undermine the message’.

The police drew closer together.

The taunts got louder.

In a side street the students' union were handing out leaflets, passing out banners and informing people what was going on and what the march was about. The student president did a piece to camera, effectively setting out the concerns of students. Three women students were passing out slips of paper informing students ‘these are rights if things get nasty, stay calm, be peaceful, read this’. Everywhere there were leaflets and student newspapers and signs and chants explaining what the march was about, but not what would happen next.... Many had never been in a protest before. A young student in school uniform, a blazer and tie, looked nervous and serious.

Two people laughingly rushed a barrier, it collapsed, no one seemed more surprised than they were, an elderly passerby shouted,'what do you think you are doing?'.

This protest was striking to me too for the way it was being e-recorded everywhere. In the middle of the milieu students were blogging, texting, twittering, filming ...Whenever a skirmish broke out puffer jacket journalists descended, but students were there first, blogging on iphones, recording on camera, the physical and the virtual world merging.

The e-messages may not be clear yet, but they're emerging. Referring to the wiki-leaks story a young student suddenly volunteered to me–‘it’s all coming out now, all this information, makes you look at the world differently, why did we not realise it before? Shell are all through the Nigerian government and now credit cards blocking wiki leaks...I mean its all oil and finance and war, these fees and cuts, it all seems so unfair given everything, sort of... corrupt, we aren’t going to take it!’. On television later in the evening a student commentator remarked, 'freedom is important to me, with the prospect of a huge debt I won't feel free'. Another asked a politician, 'how is the prospect of 30 years debt, progressive?'. A third simply said, 'my two youngest brothers probably can't go to university now, I am here for them'.

I left the protest as tensions were mounting. Later I heard the news that some groups had attacked Treasury buildings and the Prince's car. As I left a few horses were drawing up Whitehall. I watched television with horror as horses charged a young, vibrant, frustrated, angry crowd.

The lines of police surrounding parliament before the protests began, forced me to wonder what kind of democracy might turn on its children, or feel the need to protect itself from them?

I was struck on reflection however, by the absence of adults and the vulnerability as well as the anger of the protestors.

There were mums and dads and academics and grandparents there, but not many.

Certainly the 'carnival-like' atmosphere I heard described as the march started had disappeared by the time these very young protestors reached parliament.

In politics citizens learn by doing. But if, as the political rhetoric tells us, we are 'all in this together', student political learning needs intergenerational support.

Evening news reports compared the events that unfolded to poll tax riots. But this is not a generation that remembers the poll tax. Nor is it simply a new generation of university student protest.

This political movement is significant for the numbers of very young, diverse groups of children taking part, many of whom will only vaguely recall the anti war protests of the last eight years.

Where were the adults today as Britain's youth found their political voice and needed them?

Each generation has its own political moment, but at such a challenging, difficult time, don't we owe our children and our students something more?
Posted by Assc Prof Bronwyn Hayward at 16:40 2 comments:

Labels: Where have all the adults gone?
Newer Posts Older Posts Home
Subscribe to: Posts (Atom)