Submission on the NZ Education Bill 2012

New Zealand, my home country is currently embroiled in a debate only too familiar to those who have experienced the reform of schools in New Orleans post hurricane and the introduction of privately controlled, state funded 'charter' schools in other areas. NZ's proposed legislation is here. My own submission about this bill is below. If you would like to make a submission applications close today (24 February) and can be made online here.
The teachers' unions have made several submissions, one has been released by the national magazine, The Listener. An extraordinary press editorial by the NZ Herald, an Auckland based newspaper, attempted last week to suggest the changes to New Zealand's education system were minor, they are not. I share this submission below in the hope it helps children and their families in New Zealand.


Submission on the Education Amendment Bill 2012


I am a resident of Christchurch, a political scientist and senior lecturer in the School of Social and Political Sciences at the University of Canterbury and author


My specialist area is over 20 years research and practice in political science and geography. My expert focus is in the area of governments' responsibilities to communities in a changing world-with a particular emphasis on youth and children in periods of environmental, social and economic change.


My expertise includes an understanding of the issues facing young people internationally, I have served as a lead author for the United Nations Environment Programme study of young lives in 18 countries, and I am working with that agency and research partners in the Sustainable Lifestyles Group at Surrey University to develop a new world survey of issues confronting children in 21 cities globally. I am also co-researcher for a Norwegian Norklima funded study of Young Norwegians with colleagues at the University of Oslo.


I also write from personal experience as a parent and as a past School Board chair for the largest bilingual primary school programme in the South Island of New Zealand.


I recently returned from a three year fellowship in the UK where I researched issues facing European youth and wrote up a four year study of 160 children’s experiences growing up predominantly in Canterbury, NZ. The children were aged 8-12 years, drawn from diverse ethnic backgrounds they attended 9 primary schools across a range of social economic deciles, bilingual and faith based education. The results of the study have been published as a new book Children. Citizenship and Environment: Nurturing a Democratic Imagination in a Changing World (Earthscan Routledge London). This book was also selected to represent New Zealand in 2012 at Frankfurt Bookfair's international charity event Litcam which focused on children and active citizenship.


Drawing on the Children Citizenship and Environment study I note the following:

1)      The poorly understood risk to our democracy of s 158: The results of the Children, Citizenship and Environment study are surprisingly relevant to this committee’s work. Firstly many of the New Zealand children we interviewed from all decile ranks of primary schools, spontaneously volunteered examples of active citizenship. Even if their own parents did not take part, children were aware of other adults serving on School or Kura Boards, acting as parent helpers or sport coaches, supporting Kapa haka etc . It matters that children have opportunities themselves to practice democratic decision making and active citizenship, but it also matters very much that they observe and participate in a culture of real democratic decision making with adults and older peers.


We cannot underestimate the way in which children, as citizens in our community, learn democracy by both doing and experiencing democratic decision making in, non profit Kura Kaupapa and Tomorrow’s Schools.


The democratic nature of the governance of their existing  charter schools (Tomorrow schools) is a precious legacy or taonga for our nation at a time when many countries are struggling to reinvigorate democratic values.


At the very least there should be a much wider and robust public debate about S158 B, C and D which in effect enable private companies and investors to use public assets for private profit in education, which represents a significant shift in values and vision. NZ state schools have been built by tax from New Zealand citizens, by the labour of parents in working bees, by the aroha of kuia, grandparents and parents, who have volunteered for, knitted for, read to, sung with and nurtured our tamariki, our children alongside their teachers. The legacy of this embedded community education is rich and powerful and it is not one we should brush aside so quickly to replace by handing community taonga to private interests.


2)      The potential implications for exacerbating social inequality and cultural tension


Anyone who has ever served on a school board will know reform is needed.  They will understand how frustrating aspects of the board process are, there are often few volunteers, and at times it does seem education has been captured by a middle class. Low income communities often struggle to find enough volunteers and professional parents dominate boards.  Reform is needed and provisions in the bill which enable more state appointments (but fewer than half) are welcome. But, and this is a very important but, until now our state schools are OURS in that they are owned and operated and funded by the community and their goal is to develop young citizens of New Zealand.


Given so much rapid demographic change amongst the under 14 year cohort of New Zealand, it is quite remarkable that we have had enviably little ethnic tension. New Zealand has experienced racial tension and faced serious social issues but as countries around the world struggle to integrate new migrants, or battle with resentments that are very bitter, we are extremely lucky in New Zealand that this community has not seen that scale of tension. We are not perfect and there are very deep divisions in our small state. The Children Citizenship and Environment study for example, revealed how children attending two state schools only a few blocks apart in one city can lead very different lives, but our state schools have been very important in supporting the integration of new citizens. This new bill makes no provision for ensuring that each new entrant and pupil becomes part of the fabric of our New Zealand community,  or their iwi through the shared experience of values in a curriculum .


More over, given that New Zealand, along with Sweden has lead the OECD as the nation with the most rapid increase in social inequality on average in 20 years another way of thinking about this situation is that WITHOUT our differential funding scale and state education, inequality impacts would most likely be even greater.


Recent research by Gulianna Tucker and Henry Bersani, Honours graduates at the University of Canterbury in 2012 have both noted the careful way in which Sweden for example has planned the introduction of new models of schools so as not to damage the fabric of the national education system, this caution is important and is missing in this New Zealand bill.


3)       The potential for detrimental humanitarian impacts in Christchurch: It has been deeply concerning at a humanitarian and democratic level to witness the speed with which school reform has been conducted in Christchurch after the earthquakes –we all agree reform is needed and we all now agree, that plan for reform was badly communicated. But the problem is much more serious than this –where communities are struggling to recover- rushed changes that have not been developed by the communities themselves can seriously destabilise community recovery. In disaster research we are very anxious that natural hazards do not spiral into socially destructive collapse, our schools supported our children at a time of great need, and for many communities this support will be needed for much longer. Closing schools now and introducing the uncertainty of new partnership models could be very damaging.


In my observation of the introduction of academies (in the UK) new options poorly planned can rapidly destabilise an existing community’s educational infrastructure. Every parent wants the best for their child so the introduction of something new creates buzz, and as many rush to the new school, others are left behind in ‘sink’ schools. The effect is deeply damaging to the community as a whole. A fairer and more careful approach is to reform education for ALL children, with community support.


My most serious reservation however I leave to last- I find it deeply troubling that the proposal for new charter/partnership schools is accompanied by provision in S158X that the Ombudsmen Act 1975 and the Official Information Act 1987 are not to apply to these schools. Given the serious questions that have been raised in a thoughtful report by Conservative UK MP Jesse Norman on Crony Capitalism, and the issues of tax evasion and corruption that have plagued some new charter and partnership schools elsewhere, not to mention simple fraud issues we have experienced in New Zealand in some local boards, this is a naive and reckless governance model and our children deserve better, they deserve access to the Ombudsman and OIA, it is the right of every New Zealander.


In closing I turn to reflect on the New Zealand national anthem. Anthems are often nationalistic and jingoistic, in this context however I find the New Zealand anthem endearingly modest, “From dissension, envy, hate, and corruption guard our state”. These simple words will mean a great deal to the future of our youngest citizens.


Please act with caution, and care and resist the introduction of partnership schools without a great deal more careful planning and debate-at the very least to introduce such far reaching change requires a much greater public mandate, at the least through referenda or election manifesto .


I ask this committee to strongly  recommend reconsidering the introduction of this bill, for the sake of our children and their right to grow up in a fair, egalitarian, democratic and just society, one which reflects our common values as well as celebrating our differences. 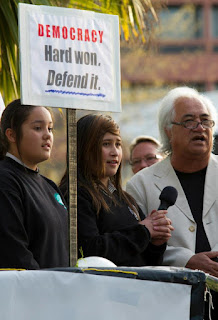 2013 marks 120 years since Christchurch, New Zealand’s Kate Sheppard and colleagues successfully campaigned to win the vote for women, making New Zealand the first in the world to grant women the vote.
We have an obligation to maintain that visionary legacy and renew it for every generation.


Democratic decision making it is not easy, its rarely tidy, and often falls short of our best intensions,  but when democracies are inclusive and socially just, they can be visionary.
The task of rethinking our democracies so they are fit for the future, can seem daunting. Everywhere people are frustrated with politicians and politics. Often the idea of democracy is reduced to something akin to mere representation of stakeholders or private interests in decision making at city, regional and national government levels. 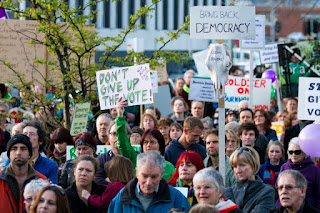 Yet  more inclusive, just democracy can offer creative decision making which ensures our economy serves its people, maintains  the sustainability of our environment, manages its resources wisely for future generations, prioritises local employment and supports education so that the goals of learning support human flourishing, critical thinking and community wellbeing.


In Christchurch, New Zealand debates about our democratic future have been more obvious and more urgent because in the wake of the 2010 and 2011 earthquakes much of the community was stripped down to its basic infrastructure, and many have had to struggle to reclaim local voices, rights and visions in re-planning our future. 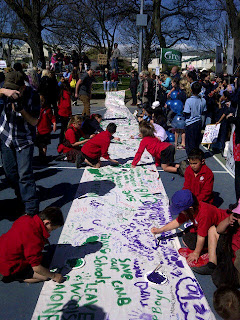 So in 2013–why not join us for a series of inclusive on line and community events, discussion, debates, children’s democratic discovery days, economic recovery workshops aimed to renew Kate Sheppard's vision in democracy and sustainability for our children-news of events to follow here.

Best wishes for a happy, flourishing and democratic 2013!