I attended a fascinating conference on Higher Education and sustainability teaching in Barcelona this week, called 'From understanding to action’. Any event in Barcelona would be fascinating but it’s fair to say the atmosphere of this conference was electric…..

Outside the conference Catalonian PhD students were protesting about real sustainability issues, they have to pay a 280%, (yes you read that correctly) increase in university fees this year as a result of Spain’s fiscal crisis.

However the devastating effect of the economic situtation seemed strangely disconnected from more narrowly framed debate about 'ecological' sustainability inside the conference.

But important connections were made by key speakers. The UN University Rector Konrad Ostterwaler welcomed delegates with an impassioned plea for universities to challenge economic growth policies that are unsustainable in the long term.

Christine Escrigas, the executive director of GUNI (Global university network for innovation) also bravely faced potentially cynical responses to argue that in teaching sustainability in higher education the most important thing we can do is to teach students to question what they take for granted and to imagine new realities (while projecting an image of the Little Prince, with the caption: ‘A new conception of being in the world').

The Spanish chair of the higher education and sustainability panel argued, ‘we don’t need to teach behaviour change, and we certainly don’t need more greener consumers, -what we need to teach is citizenship, to foster students who can think critically and understand their reality and take revolutionary action to change this reality. Strong stuff...

Prof Naranjo (Chile) argued we are teaching generations of students to ‘tame their activism’ and to think in a patriarchal dehumanized ways. He called for sustainability teachers to teach wisdom, rather than knowledge.

These wider visions appeared to be diplomatically rebutted however by at least one keynote speaker who argued that universities are the last remaining public spaces able to think long term. She agreed we must rethink values, but we should also research and teach about 'new technologies' as they are the key to 'reinvent our sustainable future'.

Later in the conference, much concern was raised about this argument. There was debate about whether teritary staff and students around the world, on short term contracts or facing high study debt, are in constant pursuit of funding and competing rather than collaborating with each other and with community groups. Do current funding arrangements threaten the long term vision of sustainability teaching and research? Are we constantly reframing sustainability in ways that might appeal to funders (predominantly business interests and philanthropic groups in North Amercia, government and international agencies in Europe or aid agencies, development banks and foreign investment in developing countries), rather than responding to the long term needs of our communities or our convictions about what matters and should be researched and taught?

All in all a tremendously stimulating conference- not your normal ivory tower gathering -but just as stimulating for what was going on outside the hall and in the corridors.

In those places there was intense debate about what teaching and researching sustainability means today. This meeting had followed a workshop between Palestinian and Israeli delegates about whether sustainability can be researched, let alone taught, in an atmosphere of oppression. In the regional workshops people debated sustainability in a context of economic debt, consumer societies, war, oppression, or corruption. Many expressed concern about the rise of fundamentalist thinking everywhere (be this religious, economic or scientific fundamentalism).

The sustainability concerns which troubled the students and delegates in Barcelona were varied and urgent. I was reminded that as teachers we often learn most from listening to our students and each other.
Posted by Assc Prof Bronwyn Hayward at 02:16 No comments: 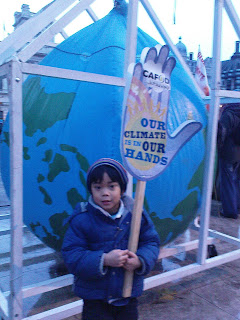 This blog is the forerunner for a book we are writing called Children, Citizenship and Environment: nurturing a democratic imagination in a changing world.

Children, Citizenship and Environment is written for researchers, teachers, parents and community groups who want to support children growing up in a changing environment, to learn how to make a difference democratically on issues which matter to them.

I argue that to address far-reaching, complex environmental problems effectively in the future, young citizens will need fewer lessons in turning off the lights, and more opportunities to nurture a democratic imagination.

The new, complex problems that face children as they grow up like climate change, youth unemplyment, food insecurity and growing social inequality are problems that will require new citizenship skills. To address these problems, citizens will need skills of critical thinking, reflective action, effective listening, communication, and the ability to reason about justice. To add to this daunting list, citizens who want to make difference democratically about global change will need the virtues of empathy and tolerance, co-operation, moral reasoning, determination and courage and the ability to live and act within material limits- easy isn’t it?!

Over the next few months we welcome your thoughts and ideas as we explore and share new kinds of democratic thinking that might help children growing up as democratic citizens to think about and act on environmental problems more effectively.
Posted by Assc Prof Bronwyn Hayward at 06:06 6 comments: