New Zealand, like many economies has experienced rapidly growing inequality - but in the past twenty years New Zealand's  gap between  rich and poor has grown faster than any other country in the OECD, except Sweden.

Local reaction to this growing inequality was intially slow but student protests and concerns about education cuts are begining to be expressed in ways which are reminiscent of the early days of resistance to Austerity in Europe. New Zealand appears to be entering a period of moral crisis which has potential to raise questions about the very legimacy of government.

Critics of New Zealand's version of an Austerity budget argue the 2012 budget is silent on growing child poverty and exacerbates intergenerational inequality as many of New Zealand's wealthiest babyboomers are not paying a fair share of tax. Certainly the budget has failed to revisit previous tax cuts granted to high income earners. Instead it aims to claw back tiny amounts through an array of small taxes and cuts, including a penalty on kids' pocket money, cuts to public education and increasing state class sizes, raising medical prescriptions and ending student loans after 4 years. The difficulty with this strategy is that it hits the poor and middle New Zealand harshly, and  exacerbates the problems facing young citizens. For example, the time limits on student loans, in a country with the highest proportionate share of youth unemployment in the OCED (45 percent of  NZ's total unemployed) begs the question: what are young citizens expected to do if they can't find work and can't afford to continue to study?

The growing moral crisis which is implicit in the 2012 budget was intially obscured in debate. The political spin was that the new budget, 'will tax the wealthy who rent their holiday homes (baches) use their boats and their BMW company cars'. But the fact that there was no attempt to revisit past decisions to grant tax cuts to New Zealand's wealthiest citizens, and no attempt to address New Zealand's rapidly growing social inequality, raises deeper questions of intergenerational justice in a country which values a 'fair go'.

Yet within all New Zealand's major political parties: National, Labour, Greens, Maori, many are begining to feel concerned and uncomfortable about these issues. New Zealand and Sweden both experienced two decades of rapid income inequality, but unlike Sweden, New Zealand has had little consensus to date for a tax redistribution of wealth to support its children. However as New Zealand children's well being outcomes slip from ranking amongst the highest of the 35 OECD nations, to the bottom half of the OECD, a new consensus to support children may finally emerge.

Perhaps  its time New Zealand  adopted the UK model of a new cross party agreement on funding for children to reduce poverty,  after all New Zealand has an effective  cross party consensus on supporting the elderly. As a result kiwi's over 65 years experience  the lowest rates of poverty in the OECD,  while 1 in 5 of New Zealand's children struggle in poverty.

A really resilient community invests in the future, and it doesn't reduce taxes in a manner that takes the future from its children. But at present New Zealand has the highest gap in material deprivation between young and old of all the nations of the OECD. We can, and we must put this injustice right.

For  a link to readings from the political right on intergenerational inequality see  a thoughtful book on this issue by Conservative Minister David Willetts The Pinch: How the Baby Boomers Took Their Children's Future - And How They Can Give it Back and for  debate from the  left see the Jilted Generation by Howker and Malik 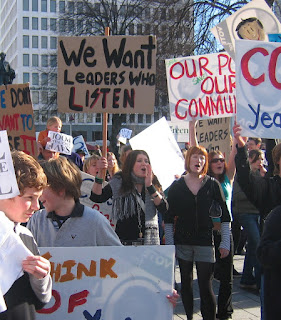 Labels: Investing in our children's future

I am delighted to post news today that 17 year old New Zealand  student Brittany Trilford has just won a world speech competition, 'Speak truth to power' in the run up to the Rio plus 20 Earth Summit in June this year.

Brittany's achievement is both tremendous and ironic. It is tremendous because her home recorded you tube speech is a thoughtful, intelligent vision for a more sustainable and socially just economy. It is ironic because her New Zealand government initially objected to Clause 57 of the draft treaty for this Rio meeting- (a clause that calls for 'considering the establishment of an Ombudsperson, or High Commissioner for Future Generations, to promote sustainable development’). No reason was given for the NZ government's position (normally that country prides itself on its democratic innovation- as the first country to have granted women the vote).

Thankfully New Zealand has now softened its outright objection and now NZ 'reserves judgment' on clause 57. Let's hope sense prevails, and they eventually support this moderate clause-which after all only suggests that the UN treaty partners investigate ways to consider the needs and rights of future generations.

Imagine, it took a kiwi highschool student to make her country proud by placing New Zealand back on the world stage at an international environmental meeting in June- not her government!

Posted by Assc Prof Bronwyn Hayward at 17:39 No comments: